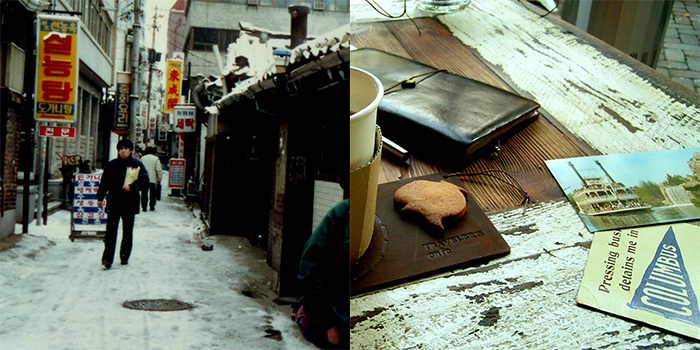 “T-kun” is a friend of mine who we used to form a band back in the days as a student.
We entered college at the same time, but since he was two years older than me, I kind of added the phrase “kun*” in the end to show respect (*the word “kun” is a Japanese word used like “Mr.,” except it has an informal and casual feeling compared to “Mr.” It is also used after a certain name).

We both shared similar interests in music, and both of us likes books and traveling so we got along pretty well.

He came from the Shinshu region and lived in Tokyo by himself. I on the other hand lived in Tokyo but rode on the train for two hours to get to school. So whenever I would be late after band practice or just drinking, I would sleep over at his house and talk over things that seem young and immature until morning.

Once we graduated and started working, he moved back to his hometown, and I was sent to the Tohoku region to work, so we lost the chance of meeting up.

Since then, he started sending me a post card from overseas once a year. Given how he works at a local city government, it was easy for him to take a leave of absence. He would have ten days of holiday and travel overseas.

As a salesman moving around busily, I was happy about receiving a message from him, but at the same time, it made me feel a little jealous.

Whenever I would receive post cards from London, Istanbul, New Orleans, and other places showing the joy of traveling, my desire towards traveling starts piling up.

On one of the letters that I received, it says that he made a band with his local friends. I was able to sense how he was living his life freely despite working as a public servant.

Once he got married, I started not receiving the post cards, but I could hardly worry about it since I was leading a busy life.

Seoul in October is a time when it gets severely cold day by day.
During my business trip, I would wear a coat and wander around the city once I finish working.
I would walk around areas such as Namdaemoon Market and areas where there are cheap hotels I stayed back when I was a student. While walking around, I would buy and eat Tteokbokki, a Korean food made from rice cake and sweet red chili sauce, and enjoy the night in Seoul.

When I’m on a business trip, whenever I have a spare time, I usually enjoy walking around on my own.

By the time I got back to the hotel, it was pretty late, so I took a shower lightly and crashed into bed.

On morning, I was awaken by the phone call I received from home. I was surprised of the call because unless it’s an emergency, I would never receive any calls from my home. As I answered the phone, I was informed of T-kun’s death.

This sad message heard during travel was too sudden, and seemed to lack in a sense of reality.

Once I returned to Japan, I visited his hometown and heard from his parents about how he was in a hospital for several months. Through this, I was able to realize the fact that he was gone.

And two months later, Joe Strummer from The Clash also passed away. T-kun and I both played his piece when we formed a band, and both of us showed heavy respect towards him.

I will no longer receive any post card from him, but every year whenever winter starts, I remember the time when I lost my precious person.

If he could send a post card from heaven, I think he might include the following message from The Clash’s piece.
“… Stay Free.”