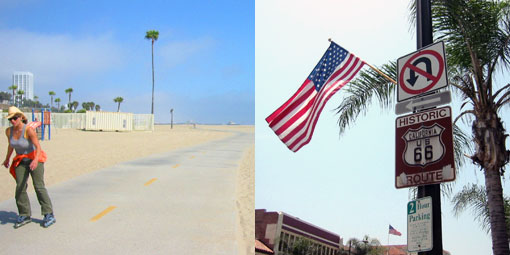 It takes six hours to get to Los Angeles from New York by plane. It’s hard to feel the distance through a simple plane ride, but when you think that this 4,000km distance is equivalent to that of Tokyo to Ho Chi Minh City, Vietnam, its possible to grasp the distance to some extent.

Jack Kerouac’s novel On the Road depicts Sal Paradise and his friends hitchhiking and riding a bus from New York to Los Angeles. The traveler’s stay at various towns on the way, and if we could travel like that, I think it’s possible for us to sense the vastness of United States.

United States itself is made up of people who have moved and are currently moving. For those people who have and are moving, Los Angeles is in a sense, an endpoint. When you take a look at the gigantic shopping malls and mansions that line along in Beverly Hills, you realize how this is a new city made on a desert that hardly had anything standing.

A woman running along the beach raises her hand to say “hi” in a friendly manner. This is something delighting to experience as a traveler, but when you come to think about it, its possible to say that this friendly culture was born from the fact that there are various races living in the same environment. But nevertheless, this friendliness and brightness is an intriguing aspect of this place.

While driving, I stop by at a diner to bite onto a large hamburger and drink a diluted American coffee. After my meal, I hop onto my car and turn on the FM radio. On the FM radio, Janis Joplin’s “Summer Time” was on air. Outside the window, you see a blue sky and a dry land spreading endlessly. The nice thing about being a traveler is that you can feel this freeness of California without any unnecessary facts and logic.

Janis Joplin, who eventually becomes the queen of blues, in her young days stuck a paperback of On the Road in her jeans, and rode on a highway bus from a local town in Texas to Los Angeles.

In the future, if a traveler that’s about to leave their hometown would express their feeling on TRAVELER’S notebook, and try grabbing their dream based on it, that would be one of our greatest pleasure.